In the early 1900s, the Rector from ‘Our Lady of Willesden’, Fr George Cologan, begged the Religious of Jesus and Mary to help him give Catechism lessons at Willesden Green. So twice a week and on Sunday afternoons, they walked through the country lanes from Crownhill Road to Willesden, to give instruction to the local Catholic children. As the parish population grew, it was placed under the care of the Fathers of the Westminster Missionary Society.  They purchased a piece of land in Linacre Road and started building a provisional church on the site which was opened in 1906.  Meanwhile, Reverend Mother St Clare was anxious to open a school in the locality and found a large house on the corner of St Paul’s Avenue and Park Avenue.  Later, a small boarding school was opened, mainly for girls who wished to enter the novitiate. By 1914 the nuns acquired a pair of semi-detached villas in Park Avenue and continued to educate both Catholics and non-Catholics in the new building. The Catholic children who were unable to attend the Convent school received religious instruction by the nuns in the church in Linacre Road (on the site of our new hall today.) By the 1920s, Willesden Green Catholic Parish, known as Our Lady of Compassion, realised the need for a Parish School for these children.  It proved difficult to find a suitable site, so it was decided to build it on the site of the parish hall and presbytery, which were demolished. The school was designed to take 300 pupils and cost £12,000.

Mother Margaret Clitheroe (Lucy Wadeson), from the Order of Jesus and Mary, was the first Headteacher, 1928 – 1931.  She was present at the laying of the original foundation stone by the Duke of Marlborough on the 24th March, 1928. The school was officially opened in October by His Eminence Cardinal Bourne.  At the opening ceremony Dr Bridges warmly praised Mother Margaret Clitheroe for her past services in the schools in the Willesden Borough. Under her capable direction and that of her successor, the work for the school children had been continued with devotion and zeal. The school was known as ‘Willesden Green RC School’ or as the Sisters liked to call it: ‘Linacre Road School’.

Mother St Ignatius (Agnes Winifred Browne), 1931 – 1949 was Headteacher during the Second World War. On 1st September 1939, together with Mother St Stanislaus and Mother Columban, she led the evacuation of the school children to Dunstable. On the next day, the Convent received a wire telling of their safe arrival. The school was closed 13th September to 7th October 1940 because the Headteacher’s Office was bombed and many school records were destroyed. It was also closed to celebrate VE day and, on November 20th 1947, on the occasion of the Royal marriage of Princess Elizabeth and Philip Mountbatten.

Mother St Stanislaus (Annie Scully) was a teacher at the school since 1936 and became Headteacher in 1949 when there were 490 children on roll, aged 5 - 15. On 22nd July, 1955, the school changed its name to St Mary Magdalen’s, in line with the new name of the previously rebuilt Parish Church. In 1966 the railings and gates were added to the front of the school. The top gate is still the original but the new main gate was designed by the children when the school was rebuilt. From September 1967, the school was reorganised into a Junior School, taking pupils aged 7 – 11. In 1970, the new hall in the original building was opened.

The school prayer at the time was:

Dear Jesus, have pity on our little children. Save the schools where we are taught to know and love thee.

Bless our benefactors and never let us lose the faith for which our martyrs died.

Praise for ever be Jesus and Mary. Amen.

Sister Clare Crook (Ellen Crook) took over the Headship in 1972. In January 1973, the complete new wing was opened with an open plan area above the hall. In 1978 the school celebrated its Golden Jubilee with a special mass said by Bishop Harvey. It was always Sister Clare’s wish to extend the school, and in her final report as Headteacher she wrote “Like Martin Luther King – I had a dream! Though mine is much more than a dream – it is a great desire, which I hope will become a reality for my successor. A more spacious building and grounds for St Mary Magdalen’s school.”  Nearly 20 years later, this dream became a reality. She was an inspiration to her pupils, and some even returned to teach at the school. 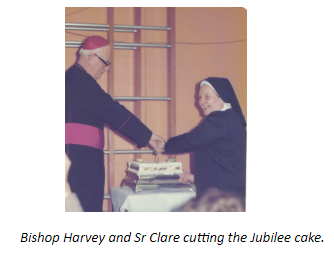 Mrs Pauline Sarkissian (née Holden) started teaching in St Mary Magdalen’s in 1969 and became Deputy Headteacher seven years later.  It was during Mrs Sarkissian’s headship ,1990 -2001, that Blessed Claudine, Mother Foundress of the Jesus and Mary Order, was canonised on March 21st 1993. The first four Headteachers and many staff were Jesus and Mary Sisters. In 2000, six houses were demolished in Lechmere Road making way for the school’s new grassy area. Applications were submitted for further development, but were turned down by the Department for Education. Bishop Vincent Nichols celebrated Mass in the school hall in 1993 and visited again in 1998 to watch a Year 6 assembly on ‘Sky and Space’. In November 1995 the inaugural meeting of the Student Council took place and continues to this day giving a platform for pupils to voice their opinions and suggestions.  It was from one of these meetings that the girl’s school uniform was changed allowing them the option to wear trousers. 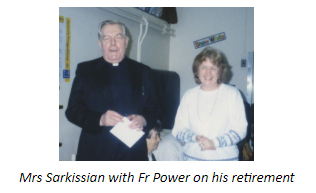 Miss Mary Carney was appointed Headteacher after Mrs Sarkissian. She continued the battle for a new school building and after a few unsuccessful applications, on the 12th October 2005, the school heard that we were successful in being offered the TCF bid for £5.6m! Miss Carney said, “When the phone call arrived and the news spread, the atmosphere was one of great excitement interspersed with nostalgia…” Building works began in April 2007.

The staff and children moved into the new classroom block in September 2008 and the hall was finally finished in June 2009. The staff entered the new building with great expectations but also a large degree of trepidation, fearing that the essence of our school may be challenged, but we soon realised that the spirit of the ‘old’ St Mary Magdalen’s lives  on through the children and adults that make up our community. The children entered our building with great excitement as a new era began.  One child was heard to say recently, “Our school is becoming so wonderful – like a palace!”

During Ms Nowicka’s custodianship, the traditional uniform that adorned pupils for many decades was updated, after consultation with the School Council. Children now wore smart blazers, with the school crest on jumpers, cardigans and on blazer pockets. The once famous Year 6 ‘red ties’ were also updated and became the ‘blue ties’, yet the tie giving ceremony (a very much looked forward to event), remains.

Championing and supporting charitable causes was also something Ms Nowicka was passionate about. Encouraging children to love and serve others, as Jesus taught us. The Charity Committee (made up solely of pupils) was developed and allowed children to make decisions about charities and causes close to their hearts. The outstanding ‘Catholic Life’ of the school was shared with members of the school and wider parish community through worship, charity, friendship and love.

Miss Lucy McSwiggan began her role as the new headteacher in September 2019. She worked on introducing the values of: Love, Excellence, Teamwork, Determination and Respect.

In November 2020, Miss Fonseca became the Executive Headteacher at St Mary Magdalen's and continues to lead the pupils, staff and school community as we move forward, keeping the Gospel values and British values at the heart of everything we do. Miss Fonseca is inspired and encouraged by the example set by St Francis of Assisi, described by Pope Francis in his encyclical, Fratelli Tutti. This will become a conscious part of our school community, where we think of fraternity, social friendship and serving one another, especially the most vulnerable.

St Mary Magdalen’s has always been blessed with committed staff who have valued its history and development. We would like to thank the many dedicated teachers and staff who have shared their talents and all those who have supported us over the years:  the Diocese, the Parish, the Governors, the Borough, the community of Willesden, the parents, many of whom have been here as past pupils, and most importantly the children.

We are a truly special family, forever growing in God’s love. 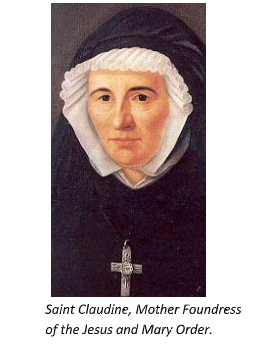 Sr Claudine – a big thank you for delving into the Convent archives and for filling in the gaps, ‘St Mary Magdalen Willesden Green 1901 – 1988’ – a history of the Parish by Eric Brentini,  Mrs Nemeth – for sharing her mementoes, school Log Books from 1940 and all staff who helped piece together the memories.